dcrtime is implemented as a client and server application, with all code open source and available in the dcrtime repo. Decred also offers a free timestamping service through its public mainnet server and a web application, dcrtimegui, that uses dcrtime as the backend. We expect this to be particularly useful in scenarios where transparency, accountability and time-ordering are of key importance, in either a public or private context (e.g. computer security, data integrity and various compliance contexts).

In this page, we list some notable uses of dcrtime, as well as describe the high-level timestamping process, dcrtime architecture, and dcrtime’s implementation details via examples.

Below are some notable uses of dcrtime:

dcrtime allows a nearly unlimited number of hashes to be timestamped. It does this by creating a single Merkle root from any number of hashes and including it in a transaction on the Decred blockchain. This process can be summarized as follows:

To help verify an anchor against the blockchain, a command line tool dcrtime_checker is provided.

The dcrtime service is comprised of four components:

The diagram below illustrates how the components are connected. 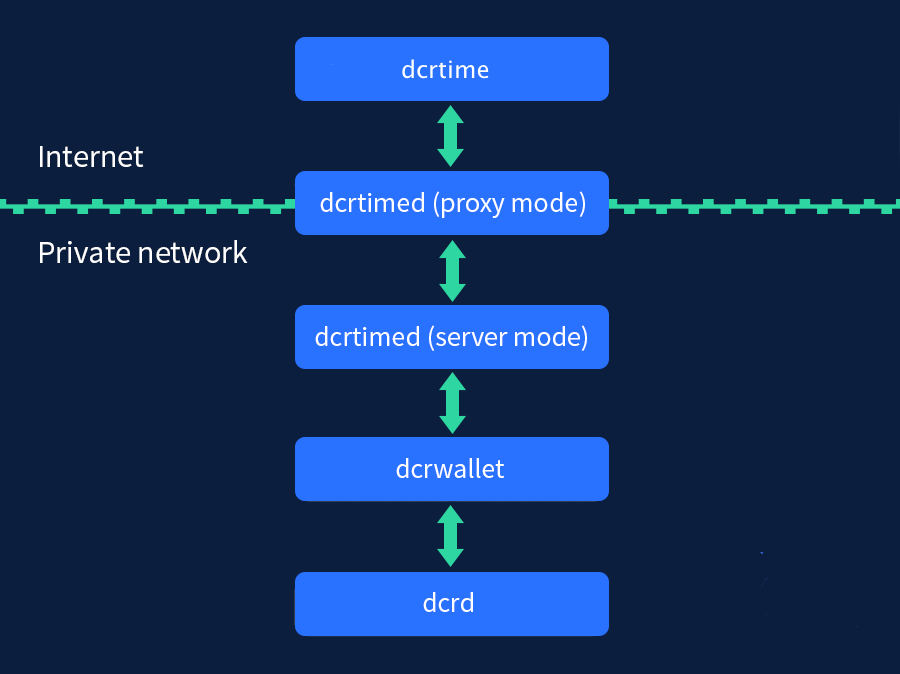 In this section, we’ll explore how the dcrtime architecture is implemented using two examples: a simple example where we timestamp a single text file from the command line, and a more complex example that uses dcrtime to episodically timestamp data from Politeia.

If you wish to follow along, instructions on setting up dcrtime can be found in the dcrtime repo.

In this example, we’ll use the dcrtime Command Line Interface (CLI) to timestamp a single text file, myfile.txt.

The below command submits the file to Decred’s timestamping server running on testnet.

As we can see from the output, dcrtime first creates a “digest” from myfile.txt (a base64 encoded hash of the file):

It also creates a “Collection timestamp” corresponding to the time the file was received by the server.

If we immediately ask the server if the timestamp has been verified, it will show Not anchored. This is because our transaction containing the digest has not yet been mined into a block.

Note that the dcrtime client does verify the Merkle path that the server returns.

Our file is now anchored in the Decred blockchain. Any third party can now prove that myfile.txt existed, in its exact form, at the time the block was mined (Chain Timestamp).

Building on our simple example, the following example illustrates how dcrtime is used to timestamp data in Politeia.

Politeia commits user data (new proposals, edits, etc.) as needed to a public git repo. For performance reasons, incoming vote and comment data are stored in the Politeia backend in “journal” files. These journal files are then committed to the repo when other data such as a new proposal is submitted, or every hour if no other data is submitted. Once Politeia verifies that these commits are in the repo, dcrtime is used to anchor the git hash for each commit. For each hash anchored, an anchor file is committed to the /anchors directory in the repo. To facilitate verification, metadata for each anchor is also appended to a single text file, anchor_audit_trail.txt, which provides a chonological record of anchors.

The diagram below provides a high-level diagram of the timestamping process. 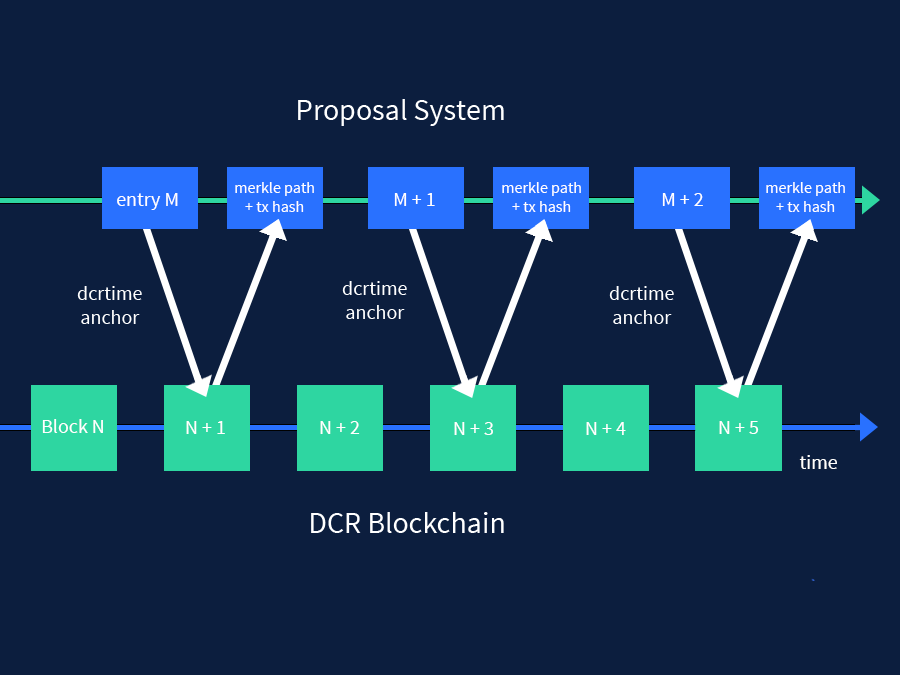 To illustrate, let’s examine an anchor from a real proposal, the Decred Bug Bounty Proposal: Phase 2 proposal. This anchor hashes two commits to the blockchain. The first commit contains all vote data submitted in the last hour. The second commit contains all comments submitted in the last hour. First, Politeia will submit an anchor commit, which appends an “Audit Trail Record” containing metadata to anchor_audit_trail.txt, as shown below.

Politeia will then wait for the transaction containing the anchor data to be mined into a block. Once it receives confirmation that the transaction has been mined, it will submit an anchor confirmation commit that contains information needed to prove the data existed at the time the block was mined. This includes the TxID of the transaction. If we enter this TxID into the block explorer, we can indeed see the Merkle root embedded in an OP_RETURN transaction.

For for information on the data stored by Politeia, see the Navigating Politeia Data page