This page is intended to give a brief introduction to how consensus rule voting works and details the process for setting your tickets to cast your preferred vote for any agenda.

The consensus rules are a set of rules which every full node participating in the Decred network must enforce when considering the validity of blocks and transactions.

Examples of consensus rules include:

It is essential that every node on the network uses exactly the same set of consensus rules. Nodes attempting to use consensus rules that differ from the majority of the network will not be able to properly validate blocks, and will eventually end up operating on their own separate network.

Decred has a built-in upgrade mechanism which allows consensus rules to be changed across the entire network in a coordinated fashion. This enables the rules to be changed predictably and without fracturing the network, and allows proof-of-stake voters to exercise sovereignty over whether or not to accept the proposed changes.

The process to change the consensus rules is detailed below.

A Decred Change Proposal (DCP) is a design document which describes potential protocol or consensus changes to Decred. A well-written DCP will include a detailed description of the proposed change, explain the motivation for making the change and provide a reference implementation.

Detailed documentation on the format of DCPs, as well as all past DCPs, can be found in the GitHub repository decred/dcps.

New node software which implements the proposed consensus rule changes must be developed and released. This software must include all code necessary to enforce existing consensus rules, as well as the new code implementing the change specified in the DCP. The new code will lie dormant until the change has been voted upon and accepted by the proof-of-stake voters.

Proof-of-work miners and proof-of-stake voters must upgrade their software to the new version before voting on activation of the new rules can begin. Each has a different threshold to meet before the upgrade is considered complete:

Once both of these thresholds have been met, the vote is scheduled to begin on the first block of the next rule change interval.

Voting takes place across the duration of a full rule change interval. Each proof-of-stake ticket which is called to vote during this interval will include votebits which indicate whether the ticket holder wishes to accept or reject the new rules, or if they wish to abstain from voting. If ticket holders do not explicitly set their voting preference, the default setting is to abstain. This is to prevent any option having an unfair advantage in the cases where ticket holders are apathetic or unaware that a vote is taking place.

Given that each block can contain a maximum of five votes, and the rule change interval on mainnet is 8,064 blocks, the maximum number of votes is 40,320. This number is deliberately very close to the target size of the ticket pool, 40,960. Allowing almost a full ticket pool to vote ensures a good sampling of votes, and that the vote result is truly representative of the stakeholders preferences.

Every vote has a quorum requirement of 10%. This means that at least 10% of all votes cast must be non-abstain for the result to be considered valid.

There are a few possible outcomes of a vote:

If the quorum requirement is met, and more than 75% of the votes are in favour of activating the new consensus rules, then a “lock-in” period begins. This is a fixed period of 8,064 blocks (~4 weeks). During this period, all participants in the Decred network must upgrade their software to the latest version. All full nodes participating in the network will automatically activate the new rules on the first block after this period, so any nodes still running the old software will no longer be able to participate.

Below is a diagram of the entire cycle for a single agenda with consensus upgrades. 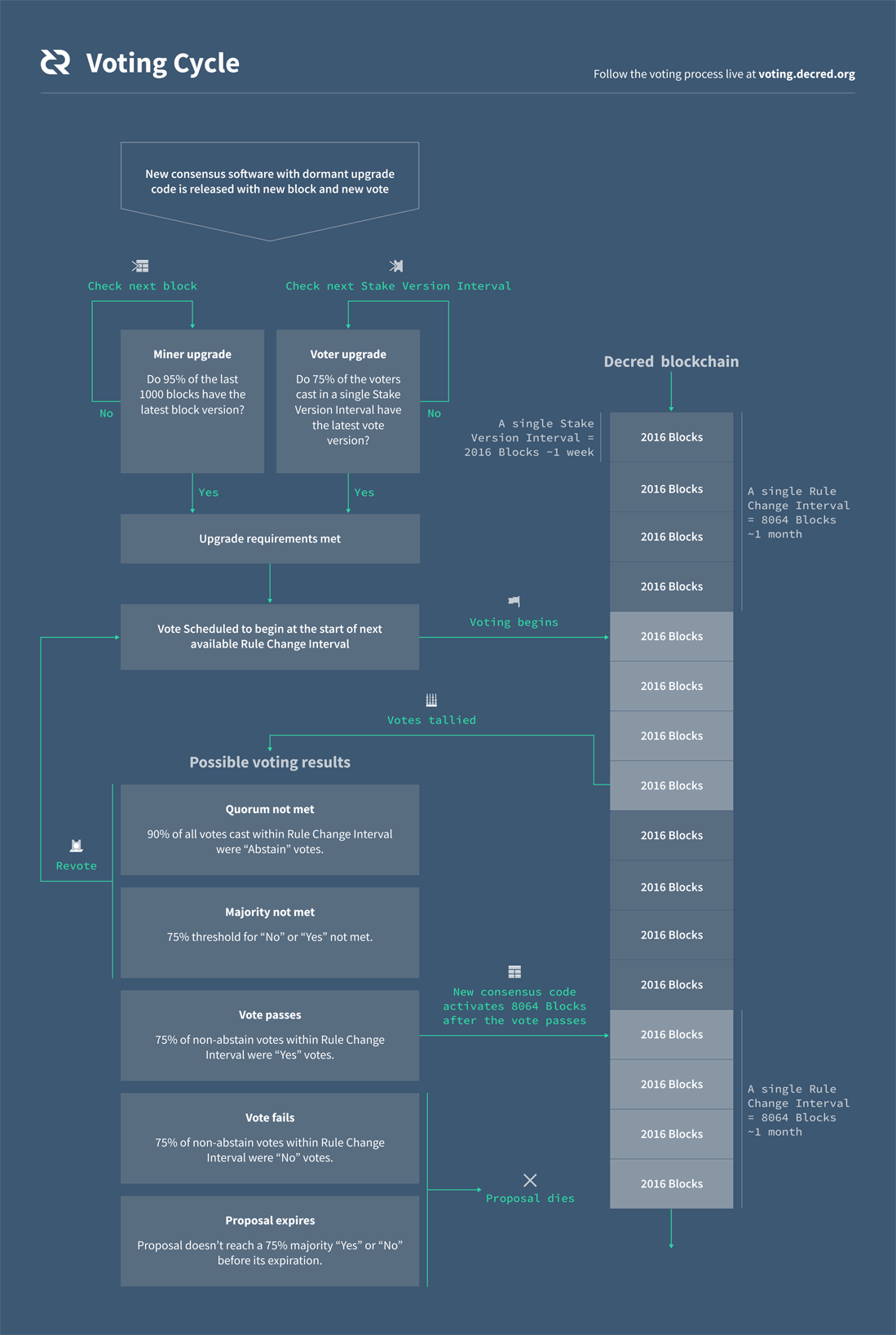 To participate in voting, you’ll first need a wallet. If you don’t have one already, visit the Beginner Guide, choose a wallet, and follow the installation and setup guides.

Next, you’ll need to buy tickets to vote with using your application of choice. Be sure to familiarize yourself with the basics of Proof-of-Stake before purchasing tickets.

Finally, you’ll need to learn how to set the votechoice for your tickets in order to cast a “Yes”, “No”, or “Abstain” vote for an agenda. By default, your tickets will cast “Abstain” votes. To set your vote choice, see our quick How To Vote.

An official website, voting.decred.org, has been set up to track the progress of upgrading and voting.