Data from the proposals.decred.org site is stored in the decred-proposals/mainnet repo. This page provides a guide on how to navigate this repo and interpret the contents of its files.

For the purpose of this guide we’ll be using this previous proposal as an example. To see data associated with this proposal, click the on the See on GitHub link on the proposal’s page. You can also look up a proposal directly in the decred-proposals/mainnet repo using the proposal’s unique hash number. For our example proposal, the hash is: c68bb790ba0843980bb9695de4628995e75e0d1f36c992951db49eca7b3b4bcd

Below is a screenshot of the root directory of the decred-proposals/mainnet repo. 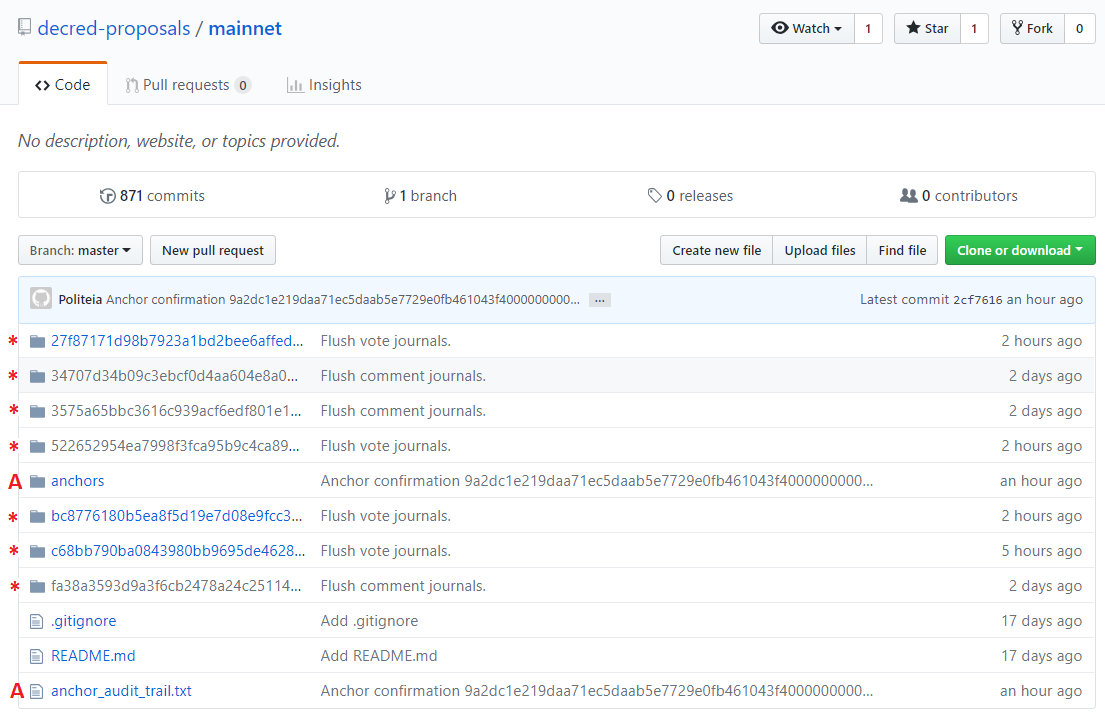 Folders marked with * contain proposal data. Folders and files marked with A contain anchoring data. Anchoring data relates to the anchoring of Politeia data to the Decred blockchain through dcrtime, which facilitates Politeia’s transparent censorship functionality. This guide will not describe those files in detail, as they are not likely to be of interest for analysis.

Below shows the contents of our example proposal’s folder. As we can see, there are two versions of the proposal.

If we click on the latest version (‘/2’), we can see all the relevant data for this version. 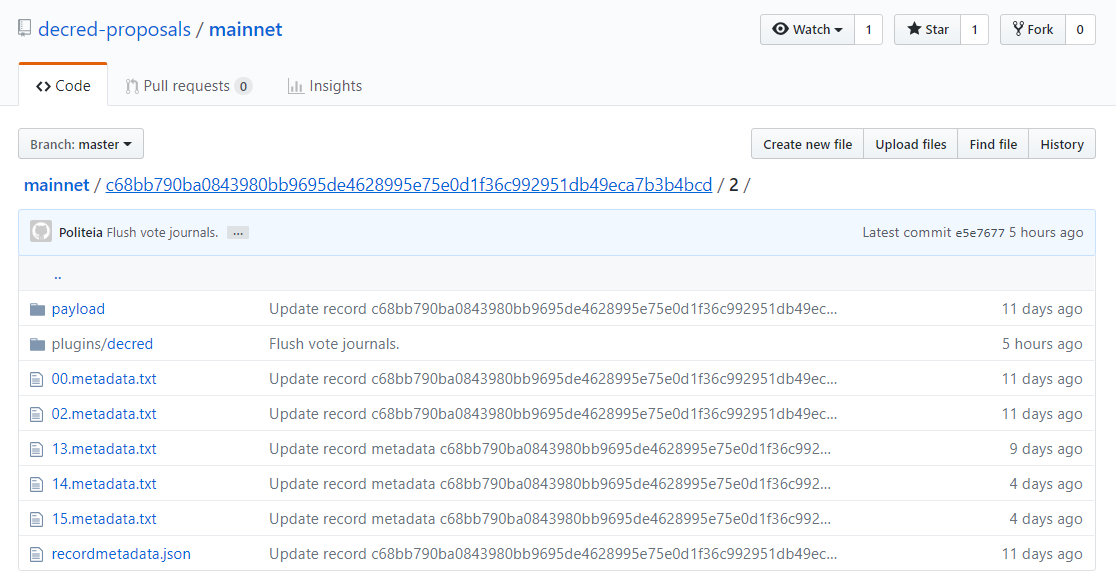 Below is a table with descriptions of the files and folders found in each proposal version folder.

A git commit is made every hour for each active proposal to update the comments.journal file. If voting has started on a proposal, the same commit will also be used to update its ballot.journal file. The hourly commits are stopped once the voting has been completed and all votes have been recorded in git. Commits are made every hour because making a git commit is expensive performance-wise and making a commit for every vote and comment would not be practical. Additionally, grouping votes in hourly commits helps protect the privacy of ticketholders.

Data on votes cast by ticket holders on a given proposal is stored in the ballot.journal file in the /plugins/decred folder. The commit history for this file can be consulted to see which hour votes were cast in. The table below describes the parameters recorded for each vote.

Data on comments is stored in the comments.journal file in the /plugins/decred folder. The table below describes the parameters recorded for each comment.

Currently, to associate a public key with a username, you need to go through proposals.decred.org. To look up the public key for a user, click on their username anywhere on the site. This will take you to the user’s profile, which has a URL like this: https://proposals.decred.org/user/350a4b6c-5cdd-4d87-822a-4900dc3a930c

The final part of this URL is the Universally Unique ID (UUID) for the account. This can be input into a public API exposed by the Politeia website, which will takes the UUID as an input and outputs user profile data, including the public key. For example, if you paste the above example UUID into a browser, https://proposals.decred.org/api/v1/user/350a4b6c-5cdd-4d87-822a-4900dc3a930c, it will return all publicly-available data for that user, including their public key: "publickey":"cd6e57b93f95dd0386d670c7ce42cb0ccd1cd5b997e87a716e9359e20251994e"